Why We Write, I saw this book in the library and took it out, curious to find out what other writers said about why they chose this career. 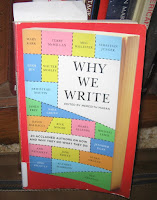 I had so many other books I wanted to read that I kept putting it aside. I almost decided to return it unread, but for some reason I renewed it. I decided to read one or two of my favorite writers in the book and then return it, but once I started, I couldn’t stop.

I first read what Sue Grafton had to say. I’ve read all of her Kinsey Millhone series so far and even related books such as Kinsey and Me and G is for Grafton. One of her comments under “Wisdom for Writers” is “There are no secrets and there are no shortcuts.”

Then I decided to keep reading since next was Sara Gruen. I had enjoyed reading Water for Elephants. “Planning and plotting and research are all fine. But don’t just think about writing. Write!”

Sara Gruen said that reporting was like being the new kid in school. It’s like being a detective. “Emotionally, it put you in the place that everybody dreads. You’re the outsider.”

That hit home since I was a reporter for years, writing for both dailies and weekly newspapers. I even wrote a short story years ago, that I titled The Outsider. It was about a child, out in the cold, looking in a picture window at a family enjoying Christmas
.
I felt that way a good part of my life. like I was just observing life instead of living it. Now I am doing both, hence the name of this blog josobservations.blogspot.com.

Again I thought of returning the book, but, you probably guessed from the title of this blog that I didn’t. Once I started at the beginning,. I couldn’t put it down. I read while eating breakfast, during lunch at work, in the evening when I should have been writing and even after going to bed.

As I neared the end, I thought about writing a blog to let others know about the book and share some of the bits of wisdom shared by some of the authors. Why We Write, which was edited by Meredith Maran and published in 2013, includes comments and hints from 20 acclaimed authors on how and why they do what they do.

Joan Didion said the writing is an aggressive act. “There’s no getting around the fact that setting words on paper is the tactic of a secret bully, an invasion, an imposition of the writer’s sensibility on the reader’s most private space.”

Maran writes “As for me: I write books to answer my own questions.” The writers in her book give a wide variety of reasons for why they write. I could identify with what some of the writers said, and at least understand where others were coming from.

Walter Mosley said that once a reviewer in Publishers Weekly said his characters weren’t even strong cardboard.  “If you keep writing what you want to write, you’re going to get a lot of rejection,” he said.


Sebastian Junger said good writing has a rhythm to the writing. If the rhythm’s off, it’s hard to read.

Like many of the writers in the book, I have been reading and writing most of my life, as well as practically driving my parents crazy with questions about everything. It was encouraging to read that the reasons for writing are so different.  Hey, maybe I need more discipline, but there are successful authors who do things the same way I do.


Michael Lewis said that maybe he made the decision to become a writer in a state of self-delusion. “When you’re trying to create a career as a writer, a little delusional thinking goes a long way.”
The 20 writers Maran chose to include in this book represent “a mix of genres, genders, ages and experiences.” 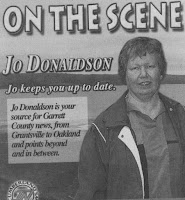 I only mention a few hints and interesting facts from the book. To learn more, you just have to buy it. A portion of the proceeds go to 826 National, an innovative youth program with a network of writing and tutoring centers.


I started reading and writing poetry when I was a kid, giving my masterpieces as gifts to relatives. I was the second page editor in high school and had already decided I wanted to write for a living.

I was lucky to get a job with a newspaper during and after college. For a while I worked in the human resources field to pay the bills, but then going back to writing for a daily paper, the Cumberland Times-News and later writing tourism articles for Garrett County, especially the Deep Creek Lake area.


As Susan Orlean said, I met people I never would have met if that wasn’t my job. I often felt “the exhilaration of stepping into an alternate universe.”

There is a part of me that continually wants to learn and then to share with others. Writing was the best way for me to do this.

If you want to share why you write, please leave a comment.
Posted by Unknown at 1:43 PM No comments:

Trying to be perfect

Katherine Pickett recently spoke on"Editor’s, Who They are, What They Do and How they Can Help You" at the Carroll County Chapter of the Maryland Writers' Association. She also discussed how writers can make it easier for their editors and help smooth the road to publication.

Katherine Pickett is the owner of POP Editorial Services, so she knows what she is talking about when she talks about editing. She also is the author of Perfect Bound: How to Navigate the Book Publishing Process Like a Pro, published in 2014.

Her keys to success: educate yourself, be flexible and work only with people you trust. Everyone needs an editor, Katherine said. But a well prepared manuscript can save you time and money. She shared lots of information about what to look for when searching for an editor, such as rates, time factors and their track record. You also need to feel comfortable with them.

I enjoyed hearing about self-editing, since I am at that stage now with my YA novel. It seems I can go over it again and again and still find minor errors. To a writer, although there are different levels of problems, but no error is minor. Even after all this rereading, I was still dissatisfied. I was looking for more ideas about how to edit my work and Katherine delivered.

She stressed that self-editing can save money and time. First take some time off, create some distance from your work. Then as you approach it again try different methods. Read it aloud and pay attention to places where you pause. Look for punctuation, spelling and grammatical errors.

Change to a larger font. It’s easier to find punctuation errors. Print your work and read it on hard copy. Run your fingers under the words as you read. Then go deeper.

Move to a new location while you review your work or try a different time of the day. Check facts, the timeline, characters and consistency. Is the tone consistent? Everything has to be in there for a reason.

Some people even edit it backwards, starting at the end and moving back to the beginning.  Approach your writing from different angles. Think of your audience. Are you speaking to your ideal reader.
Too often we see what we expect to see, not what is actually there. Question motives. Then again, question everything. The idea is to trick your brain. See what is actually there and how you might be able to make it better.


Katherine explained that there are developmental and substantive editors. A substantive editor ensures appropriate and consistent tone and smooth transitions, checks for consistency in point-of-view, eliminates ambiguity, and ensures that dialog sounds natural.

More editing follows as a book is prepared for publication. A proofreader goes through a book's layout and tries to catch anything the copy-editor missed. After receiving a manuscript proof, the author should evaluate the editing, answer any queries as completely as possible, make necessary changes and return the manuscript on time.

Pickett’s company provides copy-editing, proofreading, and developmental editing to authors and publishers across the country. She has been involved in the publishing industry since 1999, including five years as an in-house production editor with McGraw-Hill Professional and two years with Elsevier Inc. Although the majority of her experience lies in nonfiction trade books, she also has edited children’s, young adult, and adult fiction, memoirs and more.


More information is available at popediting.net or at www.thePOPnewsletter.com.
Posted by Unknown at 7:05 PM No comments: