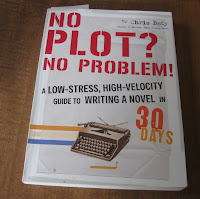 “Writing for quantity rather than quality, I discovered, had the strange effect of bringing about both,” Baty wrote. “The roar of adrenaline drowned out the self-critical voices.”

What you need is a deadline, he said. Writing 50,000 words in 30 days means you write an average of 1,667 words a day. This gives you permission to make mistakes. First drafts are always rough.

Through Nanowrimo, he found four revelations:

1. Enlightenment is overrated. Write sooner rather than later. You don’t have to wait until you are          older.

2. Being busy is good for your writing.

3. Plot happens. “Plot is simply the movement of your characters through time and over the course          of your book.”

4. Writing for its own sake has surprising rewards.

He recommends keeping setting simple in the beginning. You can add more detail later. Also, don’t judge while you are writing, nor self-edit. Write all you can while you are excited. Don’t worry about getting it right…” he said. “That will come in the revisions…your goal is just to get it written.”

Another book that may help determined writers is Book in a Month, the fool-proof system for writing a novel in 30 days, by Victoria Lynn Schmidt, Ph.D. 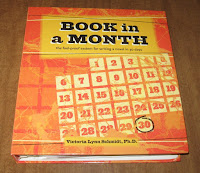 Besides giving tips, he also provides worksheets for you to use as you, such as story tracker, Writing Time Tracker, At a Glance Outline Sheet and Character Story Sketch.

Like Baty, she stresses that “You cannot write and rewrite at the same time if you want to finish a book in 30 days.”

Participating in Nanowrimo is a great incentive to write that novel you’ve been dreaming about. It gives you a goal, a deadline and at the end of the month, you will have a rough draft of a novel. That is a huge accomplishment.

Even if you don’t write 50,000 words, you have the start of a book, plus you have practiced your writing skills which will help you in the future. After the 30 days, take a break. Let life get back to normal before you start editing.

For those who feel they need a little more time, but are serious about writing a novel, I recommend The Extreme Novelist: The No-Time-to-Write Method for Drafting Your Novel in 8 Weeks  By Kathryn Johnson. Check out my blog about this book under January 2015.

Besides becoming part of the Nanowrimo community, you can receive writing tips, a format to keep track of your accomplishments and encouragement from published writers. How much you want to participate is up to you.

Posted by Unknown at 6:06 PM No comments:

I recently enjoyed The Great Detective, The Amazing Rise and Immortal Life of Sherlock Holmes by journalist Zach Dundas.

He writes about the many incarnations of Sherlock Holmes through the years including as a mouse and pig. The great detective is as popular today as he was in the 1800s.

An avid Sherlockian, the author often mentions how so many people treat Sherlock Holmes as a real person, living in a real place.

Of course he, and we know that the stories were fiction, sprung from the mind of Arthur Conan Doyle and that there really wasn’t a 22B Baker Street. However, Dundas often treats the stories as being real as he searches for places mentioned in the mysteries. He definitely seemed to enjoy his research, often taking his family along with him.

Dundas writes about movies and actors who brought the characters to life. There were many more than the ones we are familiar with: Basil Rathbone, Jeremy Brett, Robert Downey Jr., Benedict Cumberbatch and Jonny Lee Miller.

Sir Arthur Conan Doyle’s life was exciting and he often used the methods of observation he had  used by his consulting detective. He was a physician in the Boar War, he sailed on a whaling ship while in college, later was a ship’s physician to Africa, had a medical practice, pursued advanced degrees and he was a writer.

Most people remember him as a writer, as the creator of the great detective Sherlock Holmes and his sidekick Watson. But he also wrote numerous non-fiction books which he felt were far better than his mysteries.

Sherlock says “my mind rebels at stagnation… I abhor the dull routine of existence,” so did Sir Arthur's mind. He had trouble sitting still.

Even early parodies only increased the popularity of the famous sleuth and his friend, assistant and chronicler Doctor John Watson.

Dundas write “The moral of A Study in Scarlet may be that sometimes we John Watsons of the world just need to let life’s brilliant chaos do its work.”

He writes of Sherlockian sub-cultures, and fan clubs. One of the earliest was started in Baltimore by Rhodes Scholar Christopher Morley. He wrote everything – novels, essays, and poems. By the time he was 36, he’d written more than 20 books. He worked for newspapers, started magazines, staged plays, edited anthologies and later became a radio personality.

He also started The Baker Street Irregulars in 1934. That organization continues today, along with many others. He gives references to other books on Sherlock Holmes, movies, illustrators and fan groups.

Holmes and Watson were fictional characters, but the stories captured the world’s imagination. Sir Arthur's stories are known for their great characters and settings. I had read most of the stories years ago. Today I find no problem with watching an old Sherlock Holmes movie, then moving on to “Elementary” or (my favorite) “Sherlock.”

“The mass media made this discovery in the 19th century...,” Dundas quotes Judith Flanders. “The great discovery is that crime is fun. If it’s not happening to you, it can be wildly entertaining and it sells. Most importantly, it sells.”
Posted by Unknown at 8:00 PM No comments: