Stephen King’s, On Writing, is very different then the three books I mentioned in my previous blog. It is primarily a memoir of the craft and written in a grittier, down to earth style.


In the forward, he states, “What follows is an attempt to put down, briefly and simply, how I came to the craft, what I know about it now, and how it’s done. It’s about the day job; it’s about the language.” 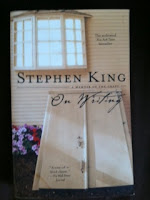 The book starts with information about his childhood and early career. Like most writers, he received plenty of rejection slips. After page 103, he discusses the basic tools of the writing trade.


He states that most books about writing are nonsense. “One notable exception to the bullshit rule is The Elements of Style by William Strunk Jr and E. B. White.” His favorite rule from that book is “Omit needless words.”


As a reader, I agree with his following two comments:

To him (and to many of us) books are portable magic. Whether you prefer reading or listening, you can take books with you almost anywhere.


About nouns and verbs, he writes, “Take any noun, put it with any verb, and you have a sentence.” Easy, right? But he continues. “We are talking about tools and carpentry, about words and style … but as we move along, you’d do well to remember that we are also talking about magic.”


Later in the book, he repeats that idea. “Writing is magic, as much the water of life as any other creative art. The water is free. So drink.”


I have to admit, I am not a fan of books that frighten me and King’s generally do that. I have read a few, besides his writing book. He definitely has a way with words.


I don’t think it is necessary to list Stephen King’s books. More than 350 million copies have been sold. He has written horror, suspense, science fiction, fantasy and non-fiction, as well as approximately 200 short stories. Many of his books have been international best sellers.


He has written under pen names and also plays in a band with other writers.


Again, I will ask if you have any favorite writing books you want to mention, feel free. I love to learn more and may write a blog about recommendations later.
Posted by Unknown at 6:11 PM

Thanks for joining me and feel free to share your thoughts.